Joe Glazer, known as “Labor’s Troubadour,” dies at the age of 88.  In 1979, Glazer invited fourteen other labor musicians to the George Meany Center for Labor Studies in Silver Spring, Maryland.  The event became an annual one:  the Great Labor Arts Exchange, which is still going strong today, under the auspices of the Labor Heritage Foundation. 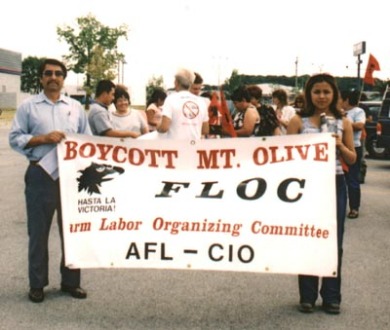 Earlier in the year, 5,000 women cotton mill workers in and around Pittsburgh go on strike for a 10-hour day and an end to child labor.  Months into the strike, hundreds marched on the Blackstock Mill, one of the largest in the area.  The women broke down the factory’s gates and forcibly expelled the scabs, while the men who accompanied them kept the police at bay. 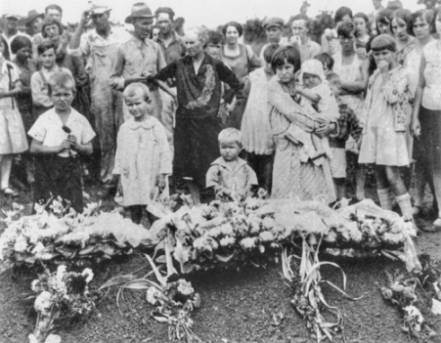 During the Loray Mill strike in Gastonia, North Carolina, National Textile Workers Union members driving back from a meeting are ambushed by a group of armed men.  Organizer Ella Mae Wiggins was shot in the chest and died; five mill employees were arrested, but acquitted of her murder, despite there being 50 witnesses who saw it all in broad daylight.  [Photo:  Wiggins’ children stand beside their mother’s grave on the day of her funeral.]

A strike in Woonsocket, Rhode Island – part of a nationwide textile strike for shorter hours, increased wages, and union recognition – results in the deaths of several workers after police tear gas the crowd gathered at the town’s still-open rayon mill.  The nationwide strike involved nearly half a million workers and affected almost 3,000 mills.  [Photo:  Textile workers in Gastonia, NC, part of the 1934 nationwide strike.]

Striking immigrant anthracite coal miners raise an American flag and march on the still-open mine in Lattimer, Pennsylvania.  They were met by the local sheriff and Coal and Iron Police deputies.  The sheriff ordered the workers to disperse and the deputies opened fire, killing 19 and wounding as many as 49 others.  All those killed in the Lattimer Massacre were  shot in the back; the sheriff and 73 deputies were arrested, tried, and acquitted.

1,100 Boston Police Department officers go out on strike over union recognition, wages, and working conditions.  Governor Calvin Coolidge called out the entire state militia and used his authority to fire everyone on strike, replacing almost the entire department with soldiers recently returned from World War I – at higher wages and with better working conditions. 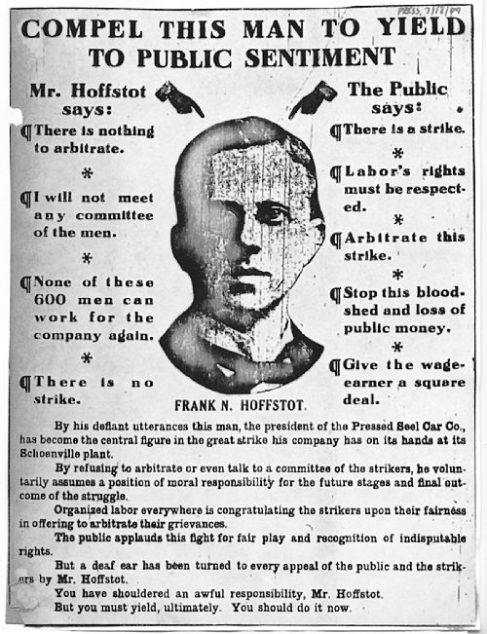 Following a brutal strike in which hundreds were injured and dozens killed, workers at the Pressed Steel Car Co. plant – called “The Slaughterhouse” because there were so many deaths on the job (an average of one a day) – in McKees Rock, Pennsylvania, go back to work after the company agrees to a wage increase, posting pay scales, and eliminating graft in job assignments.  [Photo:  The Pittsburgh Press published this image of Frank Hoffstot, president of the company, urging him to meet and negotiate with the 6,000 striking workers.]

A massive fire in the only shaft of the Avondale Colliery in Plymouth Township, Pennsylvania, kills 110 anthracite mine workers, making it one of the largest mining disasters in Pennsylvania history.  After the disaster, the state’s General Assembly enacted legislation establishing safety regulations for the industry, making Pennsylvania the first state to enact such legislation.  The law also mandated that there must be at least two entrances to underground mines.

The New York Times reports that the “contract tailors of New York and Brooklyn celebrated Labor Day yesterday by going on strike.”  10,000 workers went on strike for shorter working hours and demanded to be paid wages instead of being paid for piecework.  Unemployed tailors pledged not to replace their striking brothers.  “Reports,” said the Times, “show that the tailors…are united and will not give in.”